In 2002, the group participated in the New Brunswick Water Quality Classification Program. This project was developed by the Department of Environment and Local Government and is a reference in water quality standards and management techniques for watersheds. The Water Classification Method is a method categorizing streams into one of six classes based on water quality goals:

In 2002, the group, in partnership with the New Brunswick Environmental Trust Fund, worked on the septic tank conversion program. The goal of this initiative was to repair problematic septic tanks. Candidates for the program were chosen in terms of their financial needs, their need for repairs and their priority in terms of the environment.

Grants Brook is a stream that greatly contributes to the Chaleur Bay. It flows into the Millstream lagoon where there is a large salt marsh. Cattle had unlimited access to 600 m of riverbank. Here, the benches began to erode and sedimentation became problematic. The CBWG remedied this problem by installing a fence 10 m from the watercourse. Six hundred metres of electric fence were installed along the brook to eliminate cattle access. Between the fence and the stream, native trees were planted to stabilize the stream’s benches. Funding for this project was provided by EcoAction and Agriculture Environmental Management Initiative. 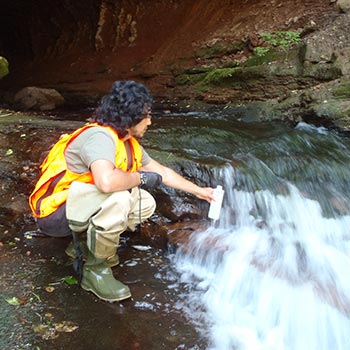 To establish the quality of rivers, water samples were collected once a month. Collecting the samples at the same place each month is of the utmost importance since it allows to compare the quality of the water from one month to another. Sampling sites were chosen to be the most representative of the water quality for each stream. Four water samples are collected at each site. These samples are analyzed for a total of 37 parameters including metals, chemicals, nutrients, bacteria and suspended solids.

Nigadoo Mine Site Assessment and Cleaning

The Nigadoo Mine was in operation between 1953 and 1977. During its operation, the mine produced copper, lead, zinc and silver. One of the biggest concerns regarding the mine site is that it is used as an illegal dump site (see video). The group, in partnership with the Department of Environment and Local Government, the Village of Petit-Rocher and the Village of Nigadoo, participated in the cleaning operations of the mine site. During this cleaning, a total of 125 tires and 5 tons of metals were collected and removed from the site. The site was covered with clean fill, signs were posted to prevent further deposits and access to the site was prohibited.